When I stepped into the Northwest Yoga Conference venue at the Lynnwood Convention Center in March 2014, the first folks arriving on the scene were the volunteers. After a brief check in with the volunteer coordinator, Julie DiRusso, they scattered around the convention center, eager to assist the attendees and presenters. Volunteers are truly the lifeblood of conferences and festivals across the country.

The Northwest Yoga Conference is different from many of the modern day conferences. It has a more intimate, community-oriented vibe which even volunteers notice. “I think that is a major difference between our event and others,” said Melissa Hagedorn, director of the Northwest Yoga Conference. “We are genuinely interested in creating an authentic connection with each volunteer and providing them with an enriching volunteer opportunity that will be as memorable and worthwhile to them as possible. From my experience, that kind of personal touch doesn’t happen at other events.” Hagedorn soaking up the volunteer experience at a 6-hour inversion workshop with Kathryn Budig.

Hagedorn knows firsthand because, after founding the conference, she decided to go and volunteer at other yoga events to see what the volunteer experience was like. Volunteers at the Northwest Conference get exposed to a variety of roles over the course of the weekend. They are not stuck behind a desk for a eight hour shift, forced to miss the presenters they were hoping to take class with. Instead, the conference team aims to provide its volunteers with the chance to take the workshop sessions they desire.

“Most other events do not provide the personalization that we do for volunteers. Other events throw you into long shifts whenever you are available and they need you and you squeeze in yoga classes wherever you can,” said Hagedorn. “We ask our volunteers for their top workshop choices and try to ensure that they are matched to volunteer work that allows them to attend workshops that they are interested in attending. We offer attendees a balanced volunteer schedule by offering them a shift at registration, a workshop shift and free time each day.” 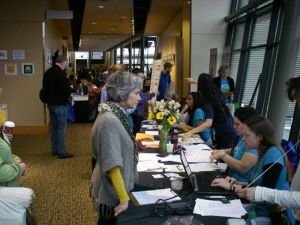 Volunteers serve an important role at the registration desk.

What’s it like to be a volunteer for the weekend of the conference? Kris Kappel volunteered for the conference in 2012 and 2013 and was an attendee at the 2014 conference. She said that the role of volunteer runs from working the registration desk to assisting the presenters to greeting attendees at the entrance and guiding them to their classes. Kappel found the role of greeter to be her favorite. “Being a greeter was probably the best, welcoming visitors with a smile & helping them to feel at home was so gratifying.”

Why choose to get involved in the conference at a volunteer level instead of just being an attendee? For many of the volunteers, it is more than being able to take workshops in exchange for helping. They find great satisfaction in being of service to the greater yoga community. According to Kappel “These volunteer positions are so important. Just as when I arrive at an unknown destination, the people there can make me feel welcome and appreciated or lost and disconnected. I am happy the Northwest Yoga Conference strives to make all participants a part of the ‘family’.” 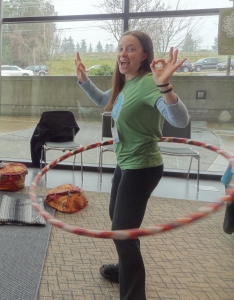 Darcey takes to the hoop at the NWYC conference.

Another former volunteer, Darcey Miller, had similar views on being part of the conference. Miller was part of the conference from its inception. She met Hagedorn at an amphibian class in 2008 and then ended up working in the cubicle next to Hagedorn. “Melissa told me she couldn’t find a good yoga conference in the Northwest. She decided she was going to start one. I asked her how I could help.” In three years as part of the volunteer conference team, Miller worked closely with Hagedorn and was an assistant director from 2011 through April 2014. “It’s so rewarding to know that people are going to enjoy the effort we put in,” said Miller. “It’s an awesome feeling to serve people and the community.”

“I was honored to be a part of the team to help make our Northwest Yoga Conference a success. The team was a joy to work with, they were & are, a brave group of hard working people with a vision & the courage to step off the cliff to make it a reality,” said Kappel. “I would volunteer again in a heartbeat. To be a part of this wonderful conference, in any capacity, is an honor.”

How would you go about getting involved in the Northwest Yoga Conference as a volunteer in 2015? Apply online! Julie DiRusso, volunteer coordinator and conference team member since its inception in 2012, says her most important criteria for volunteers is that they are available for the full weekend. “I need people that can commit to the full thing,” she said. For the 2014 conference, DiRusso had 22 applicants and ended up with 12 volunteers. The conference itself in 2014 had over 500 attendees. “Every year, we keep growing, and I want to be able to accommodate that,” said DiRusso.

Are you interested in being part of the volunteer team for the 2015 Northwest Yoga conference? Applications are now being accepted for volunteers (click highlighted text for application). The application deadline is 12/6/2014 and applicants will know their acceptance status by 1/6/2015.