While singing and reciting mantras can be fun, on this side of the Pacific Ocean we usually do not have the frame of reference to fully understand Hindu mythology. Sure, we are welcome to pick what resonates for us and and it weave into our own story, but in this freedom it is easy to innocently pick up an asana practice, song, or mantra without fully understanding the inherent energy or context behind it.

Some choose to interpret the Indian gods and goddesses as tangible entities (physical or energetic), while others may prefer to think of them as symbolic archetypes or aspects of the self and the natural world. Translating this to a yogic practice, understanding the myths and archetypes can allow for a deeper understanding of the energetics or intention of a pose. Take matsyasana, or “fish pose”, for instance. What some may think of as a mere lymph-moving or chest-stretching position carries with it the energy of Vishnu—one of three Supreme gods—who incarnated as a golden fish to tow a boat packed with flora and fauna (a la Noah’s ark) through a monstrous flood that nearly destroyed the world. Bringing this story to mind, a practitioner might play with embodying Matsya the Fish and notice twinges of strength emerging in themselves. 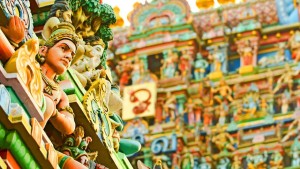 In this way, accessing the pantheon of yourself need not require asana. To call upon or honor a divine energy you might repeat a mantra, sing (as in kirtan), meditate, perform a ceremony, or maybe even just dance. In the reverse, if a particular mantra or pose resonates strongly for you, consider researching the mythology of the god or goddess energy you are invoking. To get you started on this mysterious, mythical path of self-discovery, below is a sampling of the divinities most commonly encountered in the yogic tradition. 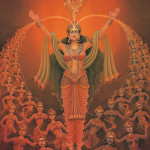 Derived from the Sanskrit word shak (meaning “potential to produce”) Shakti is the divine feminine, the powerful potential energy behind all creation. She is embodied in many forms: Parvati, the loving and devoted consort of Shiva; Kamakshi, the world mother; Durga, the unconquerable; Kali, the “Dark Mother” of fierce anger and destruction. 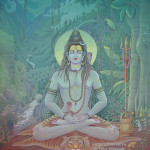 Shiva: Supreme God of Destruction and Resurrection; Asceticism and Sensuality

Certainly a complex figure, Shiva is one of three primary cosmic life energies. While Brahma represents creation and Vishnu preservation, Shiva is the god of destruction and the transformative creation that occurs out of death. He is the tapas energy, or fire, that can burn out of control if not contained by feminine energy. Usually Shiva is depicted wearing a snake coiled around his arms and neck to symbolize power over reincarnation; holding a trident to represent his role in the trinity; holding a skull to signify samsara—the cycle of life, death, and rebirth; and riding a white bull to show his control over sexual impulses. Often worshiped as a lignam, an ovoid phallic shape. Shiva is the father of Ganesha. 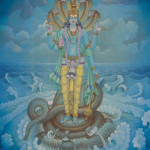 The second of the divine trinity, Vishnu is the protector of the world and restorer of moral order. Supposed to derive from solar energy, he is often associated with lotus flowers, holds a conch shell to represent the first sound of creation (“OM”), flies on the back of a giant eagle and uses a mace as a weapon, signifying the elemental force from which all physical and mental powers derive. Vishnu’s consort, or female counterpart, is Lakshmi. He famously has ten avatars, or embodiments, in myths, some of which include Matsya the fish, Rama, Krishna and Buddha. 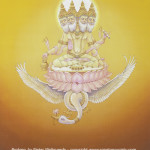 Along with Vishnu and Shiva, Brahma is the first of the Supreme triumvirate and is credited with the creation of the world and all creatures. He is said to have birthed himself from the lotus flower that grew from Vishnu’s navel at the beginning of the universe. He is depicted with four heads, faces and arms with none holding a weapon. Instead, he bears a water pot representing the all-encompassing nothingness from which evolution came, a string of malas to keep track of universal time, the Vedas and a spoon to pour holy ghee.  He rides a divine swan that can discern between good and evil. It is important not to confuse him with Brahman, who created the universe and is the Supreme god force present within all things. 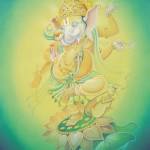 Ganesha: God of Obstacles and Success

A popular figure, the elephant-headed Ganesha is renowned as the remover of obstacles. Born and spiritually conceived when Shiva was away, Ganesha didn’t recognize his father when he returned home and lost his head defending his mother from this “intruder.” When Parvati told Shiva about his son he felt remorse and negotiated a replacement head from a wise elephant. Worshippers of Ganesha invoke him when beginning a new business, ventures, home or work of art to remove any obstacles in the way. He also holds an elephant prod to steer souls away from ignorance and illusion. Depicted with a prominent potbelly, Ganesha’s appetite for sweets reflects his underlying celebration of life’s pleasures and beauty.

Technically a demi-god, Hanuman is the child of Shiva and a forest-dwelling woman who was desperate for a child. As a hybrid being, Hanuman represents a mixture of the divine and the impure; as a child he attempted to eat the sun, which he thought was a fruit, and was struck down by a divine thunderbolt that injured his jaw. In fact, in Sanskrit hanu means “jaw” and man means “disfigured or prominent.” Hanuman is most famously known from his heroic role as Rama’s skilled and devoted general in the Ramayana epic. He is invoked for playful strength in the trials of own life, for protection against sorcery and bad luck, and to counter bad karma. 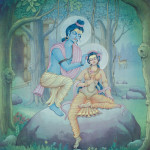 As the seventh embodiment of Vishnu, Rama is the protagonist of the Ramayana epic in which his journeys led him to kill the demon king, Ravana. Bow and arrow in hand, Rama is a hero representing the qualities an ideal man: Perfect son, loving brother, faithful friend, loyal husband, flawless citizen, ideal king and  honorable adversary. On his adventures, Rama walks the metaphorical path of dharma that leads to righteousness. His wife is Sita, an embodiment of Lakshmi, and together they represent marital devotion and purity. 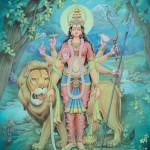 Durga: Goddess of Power and Strength

When divinity itself was endangered by evil demons, the highest gods came together to create a secret weapon. The result of their combined radiance was Durga, a manifestation of the invincible power of feminine energy. In some traditions, Durga and Shakti are synonymous. A virgin figure, she rides a tiger and carries all of the gods’ weaponry to slay the most evil of evils. She is a reminder that the divine always conquers even the worst of evils and can be invoked when powerful demonic forces create imbalance and distress. She is the mother of the goddess Kali, an angry, imbalanced and destructive manifestation of Durga’s power and strength. 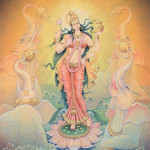 Derived from the Sanskrit word laksme, meaning “goal,” Lakshmi asks us to aim for a balance of physical and spiritual abundance. She is the consort of Vishnu, showing how both kinds of wealth are necessary for body-mind-spirit preservation. One day, Lakshmi grew tired of human greed and corruption and, in protest, dissolved herself into an ocean of milk. The world lost its luster and the gods began to churn ocean, begging her to return. Eons later, she finally emerged from the foamy ocean—much like Aphrodite—full of rasa (life-giving essence) and joy to bless those who approach wealth with nobility, beauty and compassion. 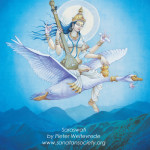 Saraswati: Goddess of Wisdom, Learning and the Arts

Often associated with the sunrise, whose rays dispel darkness of ignorance, Saraswati lives above pleasure in a space of ascetic knowledge. Often depicted in a white sari and riding a swan to represent her purity, she symbolically resists cravings of the flesh and finds joy in the power of the mind. Schools and libraries are Saraswati’s temples, and musical instruments, books, pens, paintbrushes and other tools of art are her implements. Her energy enlivens creation and she is attributed as the mother of the Vedas. As the consort of Brahma, her knowledge helped him form the plan to create the world and her arts give value to life. 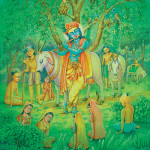 Famously known as the eighth embodiment of Vishnu, Krishna is heralded much like Jesus in the Christian tradition and some even worship him as the only Supreme Being. Even though his personality changed over the course of his life, from mischievous child to amorous cowherd to noble warrior to Supreme being, Krishna usually represents the loving, compassionate and righteous being inside all of us. Sometimes in mantra or kirtan he is referred to as Govinda, which means “protector of cows.” This is an important role in Hindu culture, as cows represent the divine mother nature who gives life.

Photos courtesy of the Sanatan Society.