Yoga is often defined in one word as union.  In two words: to join.  Yin and yang.  Shiva and Shakti.  Everything and nothing.  Spirituality and Science. 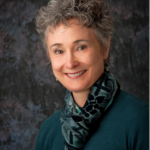 This woman is sharp.  She is 66 and she is a professional.  When she walked up to me in a busy little café on a rainy Portland afternoon, she was in an ankle length black peacoat- short grey hair just so.  Put together.  This was the medical professional before me.  As we started speaking, it became clear that she has made a wonderful life finding the balance between the science and the spirituality of yoga.

“This is going to sound a little woo woo…I was in high school.  I was standing in my dad’s back yard and I heard a voice tell me to go find a yoga class…I can still remember the first class…I remember coming out of the class and standing on the sidewalk…I was hooked.”

“Other students would come up to me and say ‘my back doesn’t hurt anymore’, ‘I don’t have headaches anymore’, so I wanted letters after my name so that I could work one on one with people.”

Thus started her quest for physical therapy.  She graduated from Pacific University in 1977, and started taking Iyengar classes.  Iyengar is known for its attention to detail, alignment of the posture, control of the breath.  It is no wonder that a physical therapist would be drawn to its structure and focus on the mechanics of the physical body.  She became Iyengar certified in 1988, and still holds that certification.

After getting a bit of her history, I wanted to know what has kept her going strong for so many years.

How do you inspire your students? 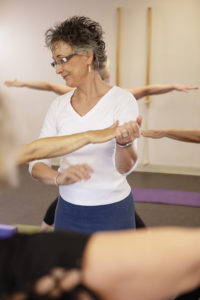 “I hope I am a positive role model for them. Not just in terms of talking; but doing and being. I’ve been known to say that I don’t talk a lot about formal yoga philosophy, but I hope by the way I practice and the way I have them practice with mindfulness and consciousness that the heart of yoga philosophy comes through.”

What is the heart of yoga philosophy, I wanted to know.

“Yamas and Niyamas. Compassion is top of the list. Honesty…Be honest about what kind of shape your body is in today. There is a lovely integrity about being present with who you are today. Not who you were a year ago. It’s not who you would be had you been doing x y and z…Compassion starts at home”.

What continues to inspire you?

Julie got a cheeky smile and discussed how she teaches an annual yoga class to the graduating physical therapy class at her alma mater, Pacific U.

“Sometimes, depending on their interest, I show them something fancy…Some of the arm balances.  Because they are dramatic.  I want them to see that yoga can really keep you in shape, even in your sixties.  The looks on their faces makes it all worthwhile.  That’s what inspires me.  To get a look like that from twenty-somethings!”

Do you have any other advice, or words or wisdom for the readers? 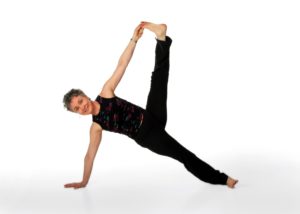 “The nature of life on this planet is change.  And…sometimes it’s going to be change that we don’t like…But there’s no choice…we have to adapt.  Our yoga practice can help us stay centered…If you get scared and you’re not sleeping, you don’t function as well.  And it will be harder to support the causes that you think are important.”

Just like Julie was hooked after her first class…I was hooked to Julie after my first meeting.  Don’t miss her sessions as she focuses on the alignment of different parts of the body…and just wait for those snippets of spirituality that shine through the science.

This is yoga in true form.